University House is delighted to welcome new members to the Board of Fellows, and thanks others who are continuing and those who have completed their terms.

Elected members, Dr John Biggs and Em Prof Elizabeth Minchin, stood down after 6 and 14 years, respectively; they were succeeded by Danny Beran and Jeremy Boland.

Prof Kiaran Kirk stood down after 17 years, many as Deputy and some as Acting Master; and Dr Jose Zapata completed a 2-year term as an Early Career Academic representative. They were succeeded by Prof John Carver and Dr Vini Gautam.

You can read more about our new members below: 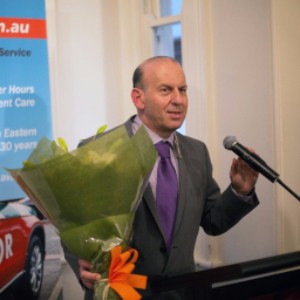 Danny graduated from Sydney University in 1980 after attending Sydney Boys High School. As a Research Scholar in 1983, he was the lead investigator at St Vincent’s Hospital, Sydney, researching skin disease, which culminated in publication as lead author in the Australian Journal of Dermatology.

Danny established a home-visiting medical ‘GP’ practice in 1983, and over the next 30 years steered that enterprise and another model of after-hours care to win multiple state and federal Government grants. In 2014, that enterprise, Eastern Suburbs Medical Service was acquired by a private equity group.

During this time while serving continuously as a GP, Danny achieved additional formal qualifications in Finance and Corporate Governance, and served on the Boards of Eastern Sydney Division of General Practice and East Sydney Medicare Locals (both NFP government agencies). As a business owner/operator, he also served on the Board of NAMDS; (National Association of Medical Deputising Services) where on behalf of the national association, he co-submitted a proposal re Standards in ‘’after hours medical care”’ to the Federal Health Minister in 2013; as well as assisting in redrafting the NAMDS Constitution.NAMDS industry association meetings were regularly held at University House, ANU; which is where Danny first encountered this wonderful institution.

Danny has been Adjunct Senior Lecturer at the School of Medicine, University of Notre Dame, Darlinghurst, Sydney since 2005; he currently has an advisory management position in a private hospital in Sydney, and still works as a doctor part-time. He has one formal scientific publication, and is the author of 2 books.

Danny has volunteer experience across the education, community, and sporting sectors; and is married with 3 children. He still plays competitive sport and enjoy volunteering currently as a museum guide.
When Danny’s son commenced studies at ANU in 2014, he became a more regular guest at University House, and appreciated the additional opportunity to participate in a House dinner, and enjoy the reciprocity of the international postgraduate college arrangements.

Jeremy Boland is a former resident of Graduate House and has 14 years experience teaching, convening and designing courses at the University of South Australia, the Australian National University and the University of Canberra, where he is a Professional Associate and a member of the College of Adjuncts.

Jeremy has worked in a variety of roles in the NGO, government and independent school sectors and is a former board member of a number of not-for-profit associations. He is currently a director of The Bright Youth Foundation, which provides camp-based leadership opportunities to young Aboriginal people in remote South Australia.

Jeremy’s research interests are in human rights and law reform and social justice, as well as identities and masculinities among disadvantaged groups of young men and members of university residential communities. His most recent publication, ‘Human Rights and Prison: A Case Study from the Australian Capital Territory’, co-authored with Lorana Bartels, appeared in The Routledge International Handbook of Criminology and Human Rights in 2016.

Jeremy works full time in a small recruitment business that specialises in the law and justice sectors, and until July 2016, Jeremy was Senior Manager, Workforce Development and Training at ACT Corrective Services. In this role he managed recruitment and training, implementing a values based approach to recruitment that improved retention, as well as a range of successful strategies to attract and recruit women and Aboriginal and Torres Strait Islander peoples to uniformed roles. Jeremy is also a former Official Visitor to the Alexander Maconochie Centre.

Jeremy lives in the Inner North of Canberra with his wife and two young sons.

In 1988, John took up a position as Lecturer in Chemistry at the University of Wollongong where he subsequently became an Associate Professor. In early 2004, he returned to the University of Adelaide as Professor of Chemistry and Head of the School of Chemistry and Physics. In 2008, he became the Deputy Executive Dean of the Faculty of Sciences and, for all of 2009, he was also Head of the School of Molecular and Biomedical Science.

Dr. Vini Gautam is a postdoctoral fellow in the John Curtin School of Medical Research at the Australian National University, Canberra. She received her Ph.D. in Materials Science from the Jawaharlal Nehru Centre for Advanced Scientific Research (India) in the year 2014, during which she worked on integrating electronic materials and devices with biological systems, specifically for application in bionic vision implants. She has an experience of experimental techniques in both materials science and neurophysiology, and she currently collaborates with researchers across physics, chemistry, engineering and neuroscience. Vini’s current research interests focus on biointerfacing of advanced materials for developing neuroprosthetic implants, and exploring novel biomaterials for tissue engineering and drug delivery applications.